History and Nature of the Civara, the Robe of the Buddhist Monk

The monk’s robe goes back to the Buddha’s own time, for it was He who introduced it to the early monks. The “triple robe” (tricivara) comprises an inner garment or waistcloth (antaravasaka), an upper robe (uttarsanga) and outer robe (sanghati) (Vin 1:94 289). In addition to these, the nun also wears a vest or bodice (samkacchika) and has a bathing-cloth (udakasatika) (Vin 2:272) which altogether comprise her “fivefold robe”.

The Sutras often mention: “Then early in the forenoon, the Blessed One, having robed himself and taking his bowl and (upper) robe, approach . . . .”

According to the Buddhist Scriptures and the Commentaries, in the early monastic days, the monks would go out on their alms-round dressed only in their waistcloth which was neatly worn, and carrying their upper robe and bowl in their hands. When the monks were in the vicinity of houses, they would put on their upper robe before going to collect alms.

The waistcloth is about the size of a sarong, both the other robes measure about 2m by 7m (about 6 feet by 9 feet). The Vibhanga says that “A monk should wear the waistcloth even all around, covering the area of the navel and the area of the knees.” It is secured to the waist with a flat waistband.

The third robe, the outer robe (sanghati), is not often mentioned in the Scriptures but was permitted by the Buddha for additional use during the cold season. These robes measure about 2m by 3m (about 6 feet by 9 feet). Unlike the upper robe which is only of one layer, the outer robe has two. This is the real meaning of the term, “the triple robe”.

According to the Pali tradition, six kinds of cloth are allowed for making the upper and outer robes: plant fibres, cotton, silk, animal hair (e.g. wool, but not human), hemp, and a mixture of some or all of them. The Buddha recommended that the robe design should be cut in the pattern of the Magadha paddy-fields.

There are a number of ways the monks wear their robes (depending usually on their sect and country). The most universal one is that which is worn for the alms-round when the robe is covering both the shoulders. The two top corners are held together and the edges rolled tightly together. The roll is then pushed over the left shoulder, down the back, under the armpit and is pressed down with the left arm. The roll is parted in front through which protrudes the right arm.

Within the monastery or residence and when having an audience with a more senior monk, a simpler style is adopted (as a gesture of respect and to facilitate work). The right side of the robe is pushed under the armpit and over the robe on the left leaving the right shoulder bare.

The Buddhist monastic robe is so versatile that it can be used, besides what is already mentioned, as a blanket, a seat-spread, a groundsheet, a head-cover, a windbreak, etc. It is easy to clean and repair. It is perhaps the oldest style of dress still in fashion after 2,500 years.

The robes serve not just as a kind of uniform to remind the wearer that he or she is a member of a larger universal community, but is itself an object of reflection to be worn “properly considering them: only to ward off cold, to ward off heat, to ward off the touch of insects, wind, sun and reptiles; only for keeping myself decent” (M 1:10). Above all, they remind the wearer that he or she has committed him or herself to high spiritual ideals — to master the Dharma, liberate oneself, and show others the Way.

All steps are being taken to hold a magnificent Kathina ceremony this weekend. Over 3o monks from various temples and communities will participate in the ceremony.  The white Kathina robe will be sewn Saturday night and will be dyed Sunday morning to prepare a traditional Kathina robe. Please read the program below: 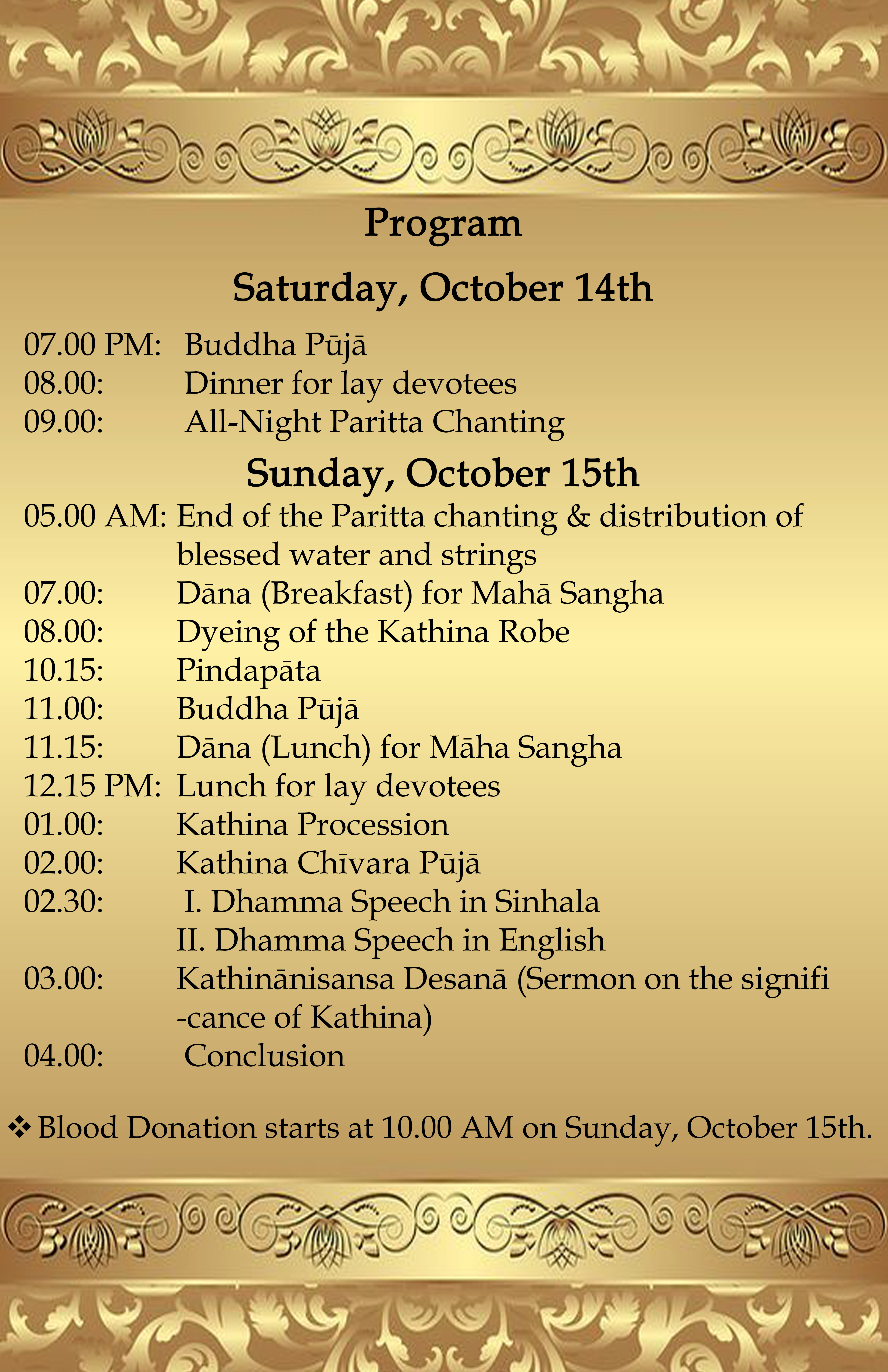