Verify First before You Act

While he was having a conversation with Mahanama, a ruler in the Sakya state, the Buddha recalled the following conversation he held with a group of ascetics.

“While I was living in the Vultures’ Peak some time ago, I noticed a large number of ascetics practicing self-mortification at a nearby place,” the Buddha began the story. “They were inflicting upon themselves harsh and severe suffering.”

The ascetics the Buddha referred to were the recluses who believed that self-suffering would allow them to achieve enlightenment. Such ascetics were very common during the Buddha’s time.

“I approached them who were thus causing self-pain and asked them why they were doing so,” the Buddha continued. “They replied that they were neutralizing the bad karmas that they had accumulated in their past lives!”

The Buddha then retold the counterargument he posed to the ascetics. He said that he asked them the following five questions thereafter:

The Buddha remarked that the ascetics answered “No” to each question, an indication that they were unable to justify their severe self-suffering.

Arched Structure at the Main Entrance

The Vihara is planning on constructing a traditional Buddhist arched structure at its main entrance. The project will be funded by Ven. Pannila Ananda Nayaka Thero. The construction will begin once the gold-plated fence (Ran Veta) is installed. Funds raised through food and plant sales in 2018 will be reserved for future projects.

In the meantime, Ran Veta, shipped from Sri Lanka, has arrived. It will be installed, and a wall (Valakulu Bemma) will be constructed around the Bodhi Tree and the Stupa soon. This project has also been funded by Ven. Ananda Nayaka Thero.

Bhante Rahula, representing Buddhism, gave speeches at two major religious events this month—one at the Presbyterian Church in the Woodlands and the other at Lamar University, Beaumont.

At “Embracing All” program at The Woodlands church, Bhante Rahula spoke about loving-kindness and offered a few minutes of meditation. At Lamar University, he spoke about acquisition of knowledge as explained in Buddhist scriptures. 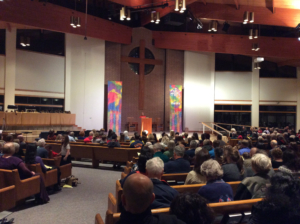 The next day of the children’s regular classes is Sunday, Dec. 2, and Dec. 9th is the last day of classes for the year 2018.

The service, which includes the Puja, chanting, and meditation, begins at 8:30 am followed by a brief Dhamma advice to children.