The Buddha’s View about Performing Miracles

Kevaddha, a householder who liked the Buddha, had a fabulous idea for the Buddha to win more supporters. He approached the Buddha at Pavarika’s Mango Grove in Nalanda and made the following suggestion:

“Sir, this Nalanda is rich, prosperous, and full of people who have faith in you. It would be better if you instruct some of your disciples to perform superhuman feats and miracles. Then, Nalanda would have even more people who are faithful to you.”

“No, Kevaddha,” the Buddha replied. “That is not the way I instruct my disciples. I do not tell them, ‘Go, monks, and perform superhuman feats and miracles for the white-clothed laypeople.’”

Still, Kevaddha was insistent. He repeatedly asked the Buddha to instruct monks to perform miracles so that the Buddha would win more supporters in Nalanda.

The Buddha then said that he would despise and reject performing miracles because he had seen the danger of such performance. He explained that, while some observers would find miracles to be true and amazing, other would regard them as a deceitful practice.

Giving examples, the Buddha further clarified that, after seeing a monk demonstrate telepathic knowledge, an admirer would say, “The great power and skill of that ascetic are wonderful.” However, another would interpret it differently: “There is a deceptive method called Majika charm, and this monk reads the minds of people by following that charm, [and not by developing any telepathic powers].”

What the Buddha emphasized was that there were more disadvantages than advantages if his disciples were to perform miracles. “That is why I dislike, reject, and despise miracles,” the Buddha remarked assertively.

Last Month of the Vas Season Begins on 24th

The last month of the Vas season begins after the full-moon day on Sept. 24. Eight Dhamma talks have now been given, and five more talks have been scheduled.

Ran Veta (Gold-plated Fence) Will Be Shipped This Week

The gold-plated fence donated to the Vihara by Ven. Dr. Pannila Ananda Nayaka Thero has now been constructed and will be shipped to Houston from Sri Lanka this week. It is expected to reach Houston harbor within 5 weeks.

The Vihara will begin building the fence once it arrives.

Lone Star College-Montgomery offers a variety of classes to the retired community in the Woodlads/Conroe area. Among them is a Buddhism class taught by Ven. Rahula Thero. 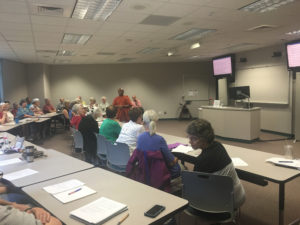