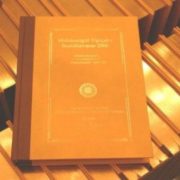 In the world there are many beliefs, rituals and practices associated with death and there are many mysteries, myths and stories centered around the phenomena of death.  We use the word death often in our daily lives.  If our car does not start we’d say the battery is dead.  The human body is like a car, when it has energy it moves around and stops running when the necessary factors, such as engine, electrical and mechanical components, malfunction.  We call the human body when it is out of life. It becomes out of life when it becomes unsuitable for the mind to dwell in.  Fundamentally, death occurs due to one of the four reason: (i) termination of Karma (Kammakhaya), (ii) end of life span – Ayu (end of strength due to genetics), (iii) end of both Karma and Ayu (iv) opposing Karma – sudden or untimely death (Akalmarana).

Buddha always advised his disciples to be aware of death.  Awareness of death brings about clarity of mind and alertness.  A person practicing awareness of death fulfills her/his duties without delay, and does not quarrel with others.  When reflecting upon death a person should not recollect the death of loved ones because that brings up sorrow.  On the other hand reflection of death is not thinking about ones own death specifically because that could bring up anxiety.  Hence, the buddhist way is to think about the nature of death.

(i) death is like a robber which robs a person of wealth etc.

(ii) death is common to everybody, whether rich or poor, strong or weak, black, brown, yellow or white, long or short, fat or lean.

(iii) death cannot be foretold by signs. For example we cannot say all the people with such and such a name, race etc. will die at a certain time of the day, at a certain age.  Similarly, the place where the body will lie after death cannot be predicted by these common signs.

(iv) Death could occur at any age, at any place, and a person’s body could lie anywhere at the moment of death.